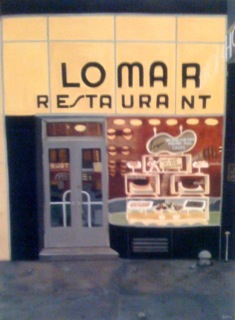 As a rule, I don’t do architectural paintings.  I painted “Madison & 33rd | circa 1952” as a birthday gift for my sister.  She’s eight years older than I am, and each of us has described ourselves growing up as Mollie and Harry’s two only children.  She was married by the time I was twelve, so I painted Lomar, our family’s restaurant, to celebrate that brief period of family history that we had shared, after I could hold up my end of a conversation and before she was married.  I flew down to Virginia to give it to her, and we had a good cry for times gone by and parents missed.  When I was painting Lomar for the second time (30” X 40” instead of 16” X 20”) at the insistence of my daughter, planning to hang it in my dining room in Florida, my painting teacher had me study the photorealistic paintings of Richard Estes to see how a master paints reflections in windows.  It was helpful for that painting, but I had no interest in trying to become the next Richard Estes.

I exhibited the larger “Madison & 33rd | circa 1952” in the BallenIsles Art Expo in Palm Beach Gardens, FL, several years ago and came home from dinner one night soon after to a message on my answering machine from a neighbor in my community who had seen the painting.  He wanted to know how I had come to paint it, because the owner of that restaurant had been his father’s best friend.  Imagine his surprise to learn that I was that owner’s daughter!  I hadn’t seen him for well over forty years, and he didn’t really remember me at all, a little girl twelve years younger than he, but I certainly remembered him, his brother and his parents, whom I had called Aunt Helen and Uncle Joe.

So I haven’t painted anything architectural since.  Until now.  My daughter-in-law came to me last spring with a photograph of RumBa, the bar in Boston where she met my son, and asked me to paint it for them.  They happened to be sitting on those two stools, right next to each other, on December 31, 2007, each with their own friends.  She asked him to take a picture for her, and now they’ve been married for two years, we have a bull mastiff grandpuppy, and a baby is on the way!  As always for me, I saw the painting that I came to call “Kismet” as a portrait of those two stools.  It took me six months to paint–now I could use a drink! 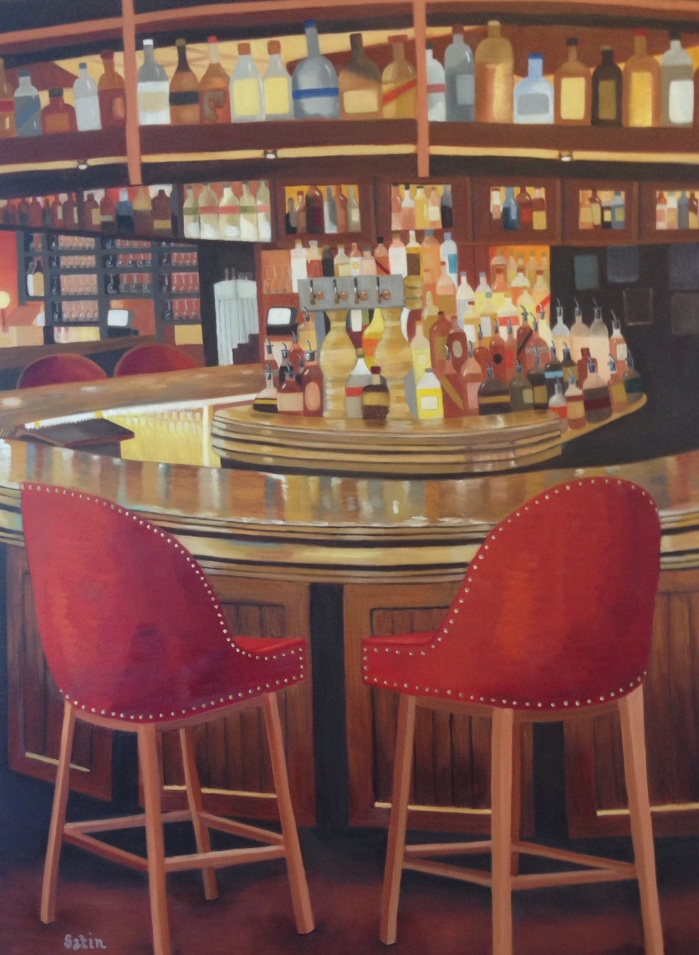 One thought on “Sentimental Reasons”