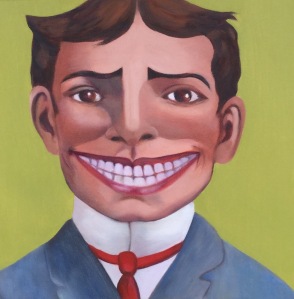 One of my husband’s best childhood memories comes from going to Coney Island–just a subway stop away from his home in Brighton Beach, but still a big treat for him when he was a kid. After the Nathan’s hot dogs, his favorite thing to do there was at George C. Tilyou’s Steeplechase Park, where he would ride a mechanical pony in the horserace course that ran two miles around the park to the finish line and gave the park its name. If his father had taken him or if he had enough money of his own (sometimes he didn’t), he’d always choose to go on the mechanical horserace ride.

A few months ago, he saw a piece in the New York Times about the rebuilding of Coney Island after the disaster that was Hurricane Sandy in New York. There were a bunch of old photos of the amusement park as it used to be in its heyday, including one of the grinning face that was the iconic symbol of Coney Island. It brought him back to a happy time during a not so happy time in his life, so he asked me to paint it for him. I find it hard to refuse him, though most of the people who saw me working on it could not understand why I would paint such a weird looking guy. The truth of the matter is, a portrait’s a portrait, and the same challenges face a portrait painter, no matter who the subject or how appealing. I’m happy to have survived painting all those teeth for him, especially when I see the smile on his face whenever he looks at Funny Face.

2 thoughts on “What I Do For Love”